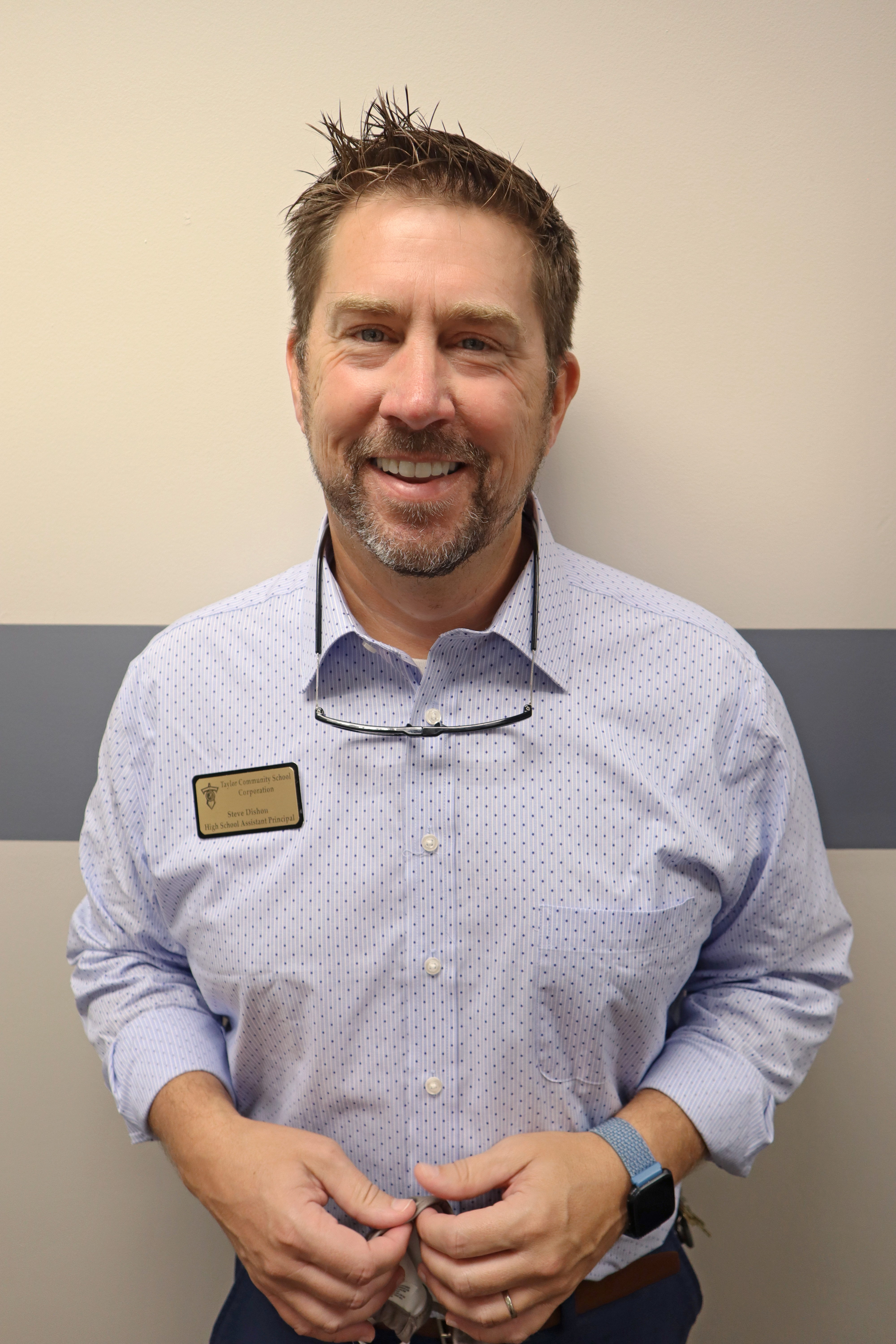 Steve Dishon, 49, became a Titan in 2003. Since that time, Mr. Dishon has taught English Literature, Speech, Composition, WTHS News Station and New Tech Digi-Com. During his tenure as a teacher, Mr. Dishon also served as the Academic SuperBowl English Coach, where his team won the State Championship in 2012. During this time, Mr. Dishon also coached varsity football and freshman basketball.

In January 2014, Mr. Dishon took over as the high school and middle school athletic director. During that time, Dishon oversaw the construction of Taylor Memorial Stadium’s artificial turf project.  In 2018, Mr. Dishon became the high school assistant principal overseeing discipline and the implementation of a Positive Behavior Interventions and Supports program. In the fall of 2020, Mr. Dishon became the Principal of Taylor High School. Mr. Dishon is a 1989 graduate of Kokomo High School. From there he went to Indiana University Bloomington where he majored in English Literature and minored in Tele-Communications. Finally, Mr. Dishon earned his masters in educational leadership from WGU. As the principal of Taylor High School, Mr. Dishon plans to increase student achievement through the aforementioned PBIS program and through implementation of Professional Learning Communities  throughout the high school. A PLC program ran with fidelity to the model will support our teachers and target instruction for our students.Mr. Dishon married his 8th grade Math pal, Taylor High School Art Teacher MaryAnne Dishon, in 1996.They love traveling and attending Colts, Blackhawks, and Fuel games. When they retire they plan to live in the hills of Italy. Steve and MaryAnne have two children, Clay and Sistine. Clay will be graduating from Purdue University with a degree in Engineering. Sistine will graduate this year with a degree in Psychology. She plans to go to graduate school and become a school guidance counselor. In his free time, Mr. Dishon hosts a weekly music podcast called Wanderings and Woolgathering. He is also a “Wednesday Warrior,” going to the comic shop every Wednesday to pick up the latest comics. His comics live in the “Nerd Cave.”

Personal Mission
:My personal mission is to support and engage our teachers through creating a building wide professional learning community that uses best practice, curricular alignment and data driven decisions to guide our daily instruction. We will use instructional interventions and behavioral supports to ensure that every child learns to the best of his or her ability.